The past two days I had the privilege and honor to work with a local National Guard MP Unit.  I completed a two day “Introduction to the S.P.E.A.R. System” course for over 30 Soldiers and had a BLAST!  The Commanding Officer of the unit is a fellow Crossfitter and asked me if I would mind giving his unit some exposure to the S.P.E.A.R. System in order to get some valuable training for his troops.  Although I only spent a short time with them, the feedback was favorable.  Most of the soldiers only had basic Army combatives training and some had other combatives training to include MMA, Jeet Kune Do, MCMAP, etc.

We covered most of our basic drills focusing on surviving an ambush such as, defense from a bear hug, tackle, haymaker, and a few groundfighting tactics.  Since this unit works in a law enforcement capacity we stuck to scenarios they were most likely to find themselves in.  I also covered our basic principles to include Primary Initiation Attacks, 3 D's(Detect, Defuse, Defend), 3 T's (Tools, Target, Tactics), and our 3 Dimensional approach to combatives (Emotional, Psychological, and Physical).

No matter where I go I still see the same problem…. the training provided to our armed professionals is lacking in the principles and tactics designed to increase their survivalbility in the event of an ambush. It is my hope that combatives instructors will expand their teaching to cover this important and most often overlooked component.  Until then I will continue my mission, to bring the best counter-ambush training to those who make self-defense a priority. 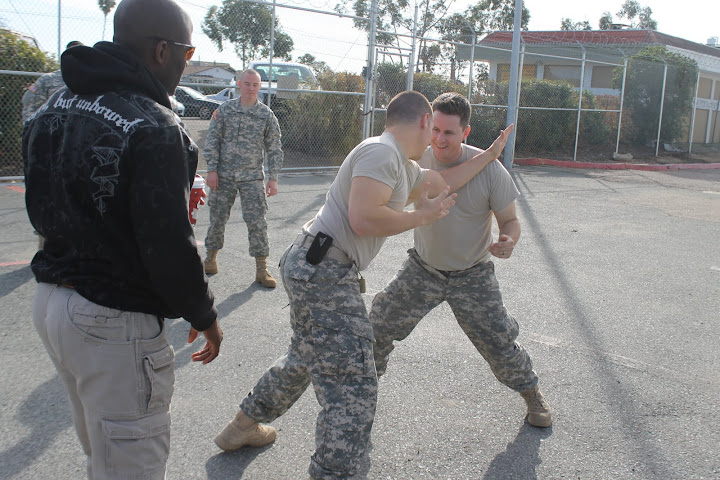 It is always a joy to provide warriors with the “missing link” in their combatives training, an understanding in Close Quarters Combatives (CQC).