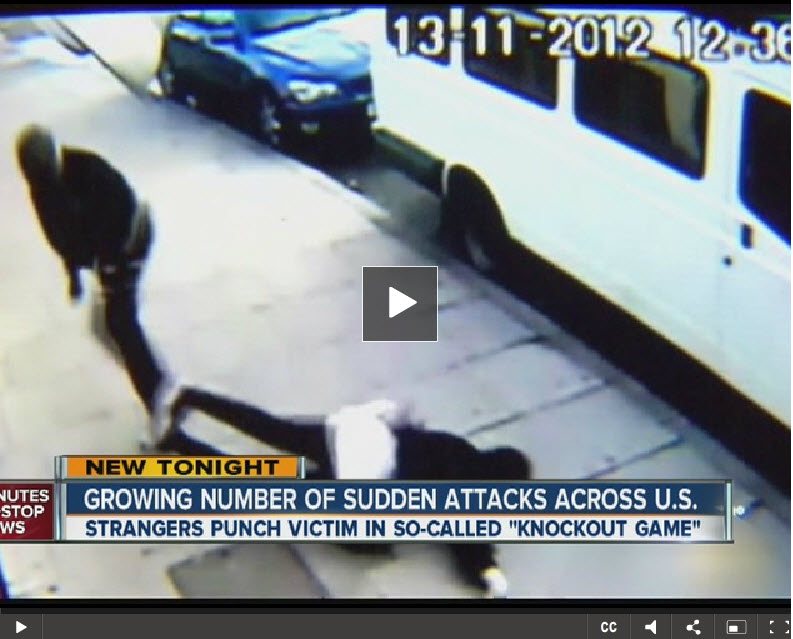 I don't always pay attention to the news (it tends to kill my vibe), but there is a serious issue happening that we all need to be aware of…If you have been tracking my social media, you may have noticed I've been posting about a game kids are playing called “Knockout”.

Reports of Sudden Attacks Across the U.S.

If you aren't familiar let me give you the rundown…Kids (normally in small groups) are “sucker-punching” adults when they are not looking with the goal of knocking them out cold.Adults unaware of the attack are being knocked unconscious.This type of attack is no less dangerous than being shot or stabbed.  I say this because, victims have the potential of being killed due to massive trauma to the head from hitting the concrete.  Some victims are being severely beaten.There has already been one case of a 46 year old man being killed found with his neck broken and his head wedged between an iron fence.I see two problems here…#1 – kids are preying on innocent victims for no other reason then bragging rights. In some cases victims are not even being robbed after attacks.#2 – what happens when victims start responding with lethal force (i.e. shooting attackers)Please don't ignore this trend.  Educate your children on these types of attacks because they maybe a target.Reports say that these attacks are being carried out by teenagers age 13 – 19.  Attackers normally assault victims in groups of two or more.  Attackers are targeting men and women, young and old.  Attackers are looking for victims that are unaware of their surroundings and alone.My advice…It's tough to give you one thing to do to avoid this type of attack.  But we can look at the empirical evidence a get some intel on the attackers (as mentioned above).Remember these principals:Evade: get away from attackers if possible.Respond appropriately: Defend yourself if necessary.  Be advised, if you have to defend yourself you maybe facing multiple attackers.  The goal is not to take them on, but create an opportunity to get away.  Use the amount of force necessary.  Victims killed by these attacks were killed with hands and feet, not weapons.These attacks are being conducted on victims that are not aware of the attackers.  There is a chance you may be knocked out on first contact or you may be dis-oriented from the first shot and have to fight from less than optimal position.If you happen to weather the first attack know that the attackers are known for follow-up attacks.If you are out in public by yourself try to stay in populated areas.  Listen to your “intuition” if you start getting nervous address it and get to a safe place.Leave your feedback, questions and comments on the 10X Defense FB page. —> https://www.facebook.com/10XDefenseBe Safe,Omari Broussard